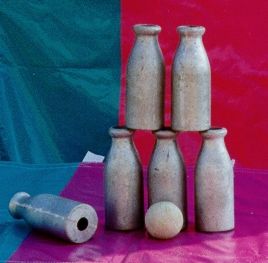 “Step right up sir and try your luck.  How about you sir?”  The man behind the counter held out a softball to the man walking up.  “It is just one dollar for two tries.”

“And all I have to do is knock down the bottles and I win a prize?” the man asked.

“Yes sir, it is just that simple.”

The man continues this for quite a while and ends up spending twenty-five dollars in no time.  When he hands the man his last five-dollar bill he says, “this is it, it is now or never.”  He takes the ball and after all but one try the most he had gotten was three.  He sighs deeply and gives it his all.  And all but the center bottle falls.

The carny smiles at the man and says, “For 5 out of 6 down you get a runner-up prize.”  He hands a small plastic toy to the man and he smiles at it and turns to the two friends he had come to the fair with.  “I did it” he says to the men.  One of them turns and asked, “But why spend thirty dollars on a prize worth maybe one?”

The man blushed and knew his friend was right, he felt like such a fool.

3 thoughts on “A Fool And His Money Are Soon Parted”