The sanguine dress lay on the floor in a pile.  Music played softly on the stereo.  And candles lit the empty room.  It looked like the perfect setting for a romance novel without the people in it.  But this was not a romantic scene.

The adjoined bathroom held three people.  The officer called to the scene and the coroner.  And a woman lay slumped in the bathtub covered in the same sanguine only this really was blood red and not a low cut dress.  The detectives had yet to arrive on the scene, but foul play was suggested by the knife wounds on the body.

The woman was a thirty-year-old single woman who was missing from work the last two days and her boss called for a welfare check as the woman had no family in the area.  The detectives would have their work cut out for them as she had few friends and acquaintances close to her for them to interview.  She largely worked alone in a graphic design business and was the quiet house in the neighborhood.  She was a very private person.

The detectives arrived and began a search of the house, with techs bagging evidence and taking pictures.  They confiscated a laptop and her cell phone.  Just as they were bagging the cell phone it rang.  This may be their first clue.  The detective raised an eyebrow when he saw the caller ID; it simply said “Him.”

“You must be crazy.  You mean to tell me she had the temerity to tell you that you need to monitor your kids more?”  Sally shook her head.  “I mean talk about needing to look in the mirror.  She has no room to talk with her son suspended last month for alcohol in his locker.”

“I know what Kevin and Kelly did was wrong, but it wasn’t for anything illegal like underage drinking AND drinking at school.  It was an alcohol-free party that just got too crowded and too loud.”  Mary looked tired.  She had been on the phone with parents most of the night.  “So what, the police came and broke up the party.  I know there is no gathering larger than 25 people outdoors allowed but everyone had on masks.  I just kind of wish I knew which neighbor called the police.” 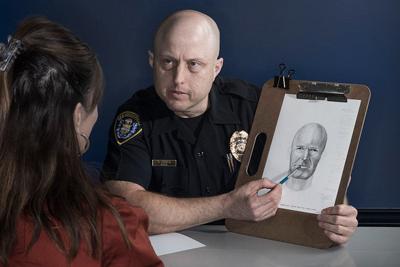 For many years he walked a beat

Became a detective when the chance arrived

Moved up through the ranks

Was second in command

I spent many days and nights

Worrying with my mom

Would he be safe

Would he come home

And with it the “golden years”

His wife grew ill and died

Then his health began to fail

But he kept his sense of humor

Right up to that fateful night

When I saw him draw his last breath

And now this holiday feel so empty

Without his loving presence

But he will always live

In my heart forever

He was an officer of the law…

This captain will be missed

Jack Watson was just returning to his desk when his phone rang. He picked it up and it was Fred Sanders from the real estate office. When Jack heard what he had to say he wrote a note for his assistant to get the editor and to call the police back.

Sergeant Wilson hung up the phone and grabbed his hat on the way out of his office. He drove to the real estate office. They were finally getting somewhere. The sketch in the paper had brought forth a lot more witnesses and information. It was finally starting to feel like they were on the right trail to track this monster down.

Fred had all the contact information ready for the Sergeant when he walked in. They talked briefly and the Sergeant thanked him for his help. Heading back to the car he had the dispatcher put a trace on the cell phone and send him the coordinates.

Ten minutes later four officers were closing in on Matthew Plumber as he was sitting at the local park waiting for the right person to come down the jogging trail that would remind him of her again and ignite his fuse. He was focused on a brunette in a blue jogging suit when he heard something behind him.

Sergeant Wilson and his men approached directly behind the suspect quietly and quickly. Guns drawn he announced, “Springfield PD, Matthew Plumber you’re under arrest.” Matthew had prepared for this moment. He moved in one rapid motion standing and reaching for his back pocket as he turned. The Sergeant yelled, “Freeze!” But Matthew kept moving. A move he had practiced many times. He had to make it look good; like he really had a gun. The officers had no choice. The guns rang out and Matthew fell to the ground.

In the weeks that followed they found all the evidence to prove he indeed had murdered four local women and one from Jonesville. He would serve no time though, as he had been pronounced dead on the scene.

Sergeant Wilson stood looking at the pictures of the women. There had been three now that had been killed in the area and one over in Jonesville that they think was tied in with this sick bastard. All women in there mid to late twenties, all brunettes. And that was the only connection they had found so far.

The last woman had been murdered near a city park and left behind for a little ten year old boy to find. It made the sergeant furious to think about. Not only was this nut after women but now that little boy had seen too much. It was like the killer had set a trap intentionally for a kid to find her all stretched out by the jungle gym.

A knock on the door brought the sergeant out of his thoughts. “Come in. how can I help you?”

“Sergeant, Williams just called in, there has been another body found near Jackson Pond.” said the officer. “It is another brunette named Melody Stevens.”

“Call the coroner, and for God’s sake keep the kids and press away this time. Tell them I am on my way.”

“Be our guest,” played in the background as the DVD spun in the player. No one was watching the movie, it looked like they had just vanished. Empty popcorn dishes stood on the floor with small blankets wadded up beside them. There was a pot of soup simmering on the stove. The table was in the process of getting set for dinner.

No one was in sight. The house was empty. There was no dog lapping at the water dish. No cat purring on the couch. The front door swung open and the police office slowly walked forward announcing his presence. His voice only echoed down the hall, “Police!”

The car was still in the driveway, the mother’s purse was still hanging on the closet door, and her cell phone was softly buzzing on the counter with an incoming message. The detective came into the kitchen and using his gloved hands grabbed the phone and retrieved the message. It was from her husband and said, “Be there in about 20 minutes. I love you.”

The detective talked into his own phone, “Trace this number right away. 555-2678 and get back to me.” He then turned to another officer and said, “Where is the neighbor that called this in?”

An officer came around the corner and with a small gentleman wearing a green coat. “This is Mr. John Harrison sir.”

The detective nodded towards the two men. “Good evening Mr. Harrison. Can you tell me why you called?”

The little man shifted his stance and said, “It was a loud boom almost like a bomb. I looked up and down the street and this was the only house where no one came out to investigate the sound. And I know Mrs. Sanders would have come out to see what it was. I didn’t see any fire or smoke so I figured it was one of those new fangled cannon guns and power bullets.”

The detective tried not to cringe at the man’s lack of correct terminology and asked, “Why did you say the Sanders were gone?”

“Well no one answered the door.”

“Detective Olsen, you might want to come see this,” an officer standing by the back door said. The detective went through the doorway and stopped short of the first step. There in the back yard was a large burned circle in the grass at least 25 feet across. “What the hell… “ was all the detective said.