I am not one who is really very outspoken with my political views.  Maybe it is because I have never really had a candidate, I thought 100% should be in office for whatever they were running for.  So, when I read the word for the day from Fandango… I was sure I could not do a poem for it.  I looked up a definition for a sample sentence and synonyms to maybe trigger something for a flash fiction piece.  As you can see here, I have resigned myself to just babble a little about it.

According to Google there is more than one definition.  I think I will talk about the first noun definition that states it is “a strong supporter of a party, cause, or person.”  Like I said I have never really been a partisan for a person.  I am a middle of the road Independent for the most part… if I have to pick a party it would be Democratic.  Now a cause, that I can get behind.

I have very strong beliefs on a couple of things.  Same sex marriages (for it), right to choose (pro-choice, and MY choice would be adoption, but I want that right to decide that) and reform on drug laws (I believe pot should be legal for medicinal purposes for all states and recreational too.) Of those three I am strongest about marijuana.

I know a couple of people who use it (one legally and one not) and it does wonders for their health.  I feel it would only benefit the local economy to legalize it.  Reduce the number of prison spaces we need.  And over all make people happier.  I have never been around a mad stoned person, but lots of angry drunks.

So, I guess I did have partisan inside of me… I will step off my soap box now and go on about my business.  Have a good night/day!

The day got away from me and suddenly I remembered I had not posted my Monochrome Monday post for the week yet.  I was looking through my pictures and with all the latest headlines around the world of tensions being high, I saw this picture I had taken at a road side park a couple of years ago and felt it was timely.  It made me think of how some places see these on the streets daily as a part of life.  I am not very outspoken or politically minded … sometimes I think I would have fit in with the flower children of the 60’s and 70’s well.  All I ask today is for a chance at peace, a chance for kids to play in the streets without fear of bombs, a chance for humanity to coexist with each other by embracing their differences instead of hating them.  Let me indulge in this one edited photo to ask only that we love one another.  I hope you have a good week! 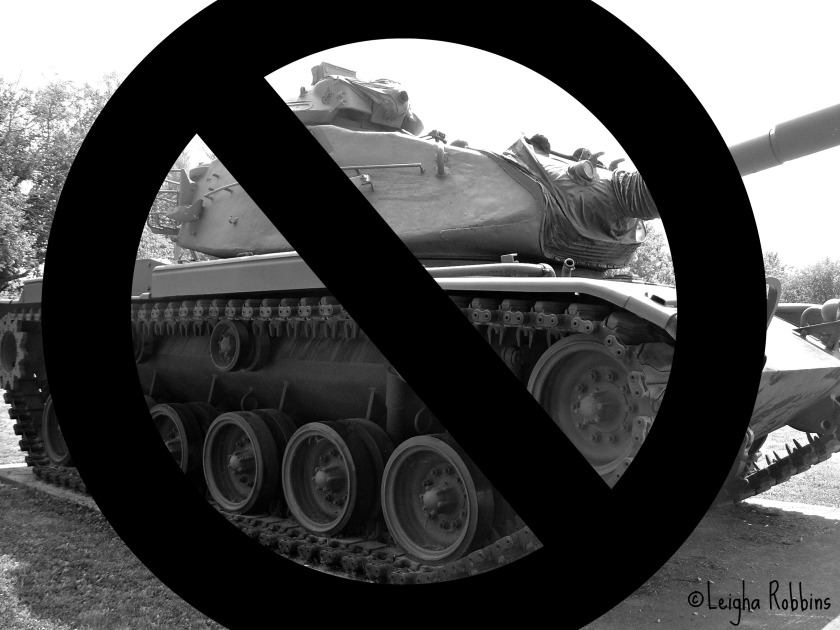